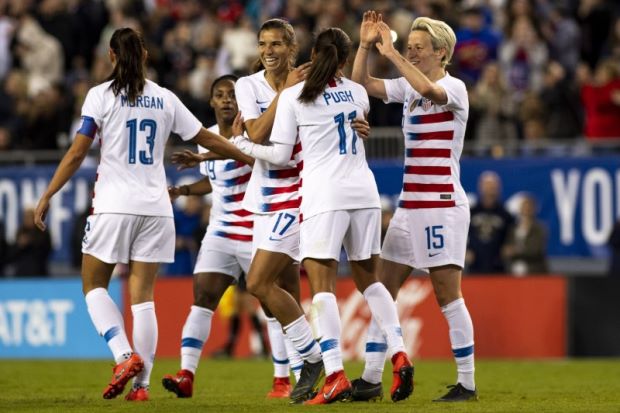 The rest of the world will have its turn. But not here. Not yet.

In a Women’s World Cup marked by European success, the United States is the last team standing. Slow at the start for the first time, the U.S. women came to life in the second half to beat the Netherlands 2-0 on Sunday on second-half goals from Megan Rapinoe and Rose Lavelle.

Rapinoe won the Golden Boot as the tournament’s top scorer and the Golden Ball as its top player. Alex Morgan won the Silver Boot.

But rather than repeating what was accomplished in 2015 or living up to the anniversary of 1999, Sunday belonged to a team built out of the disappointment of historic Olympic failure in 2016.

Jill Ellis, now validated as the longest-serving coach in U.S. history, challenged every player to compete for their places after that early exit in Brazil three years ago. Veterans responded, the likes of Rapinoe and Morgan lifting their games to new heights but also shaping the internal chemistry that players relied on in tough moments on and off the field. Able to arrive en masse and compete on equal footing, a new generation made its mark, Lavelle was the star Sunday but also a representative of a block of players who will be around for 2023 and 2027. 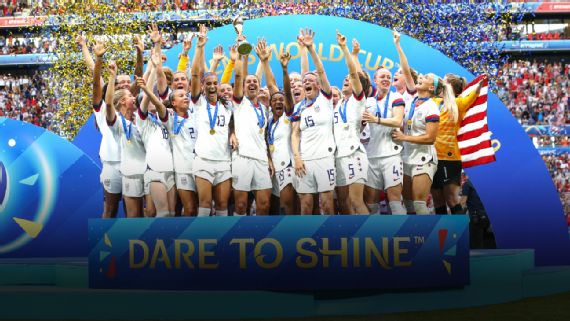 The U.S. women got a penalty kick from Morgan Rapinoe in the 61st minute and a left-footed blast from Rose Lavelle in the 69th minute to beat the Netherlands 2-0. Maddie Meyer/FIFA via Getty

So if the final turned out to be less the glorious party of four years ago than a hard day’s work?

“It’s been very hard, and it’s been a roller coaster,” defender Becky Sauerbrunn said. “I think any player that you ask has gone through their own individual ride, where [they] were high and they were low. And whether it was injury or form or anything — coach’s decision — you just kind of had to ride that roller coaster. So to make this team and then to win this tournament is a testament to all those paths and all those journeys to get to this moment.”

All of that while lending their voice to issues they believe more important than soccer, the chants from large swaths of fans after Sunday’s win shifting from “U-S-A” to “Equal pay.”

That’s the legacy of this championship team — that it found its own identity and its own voice. 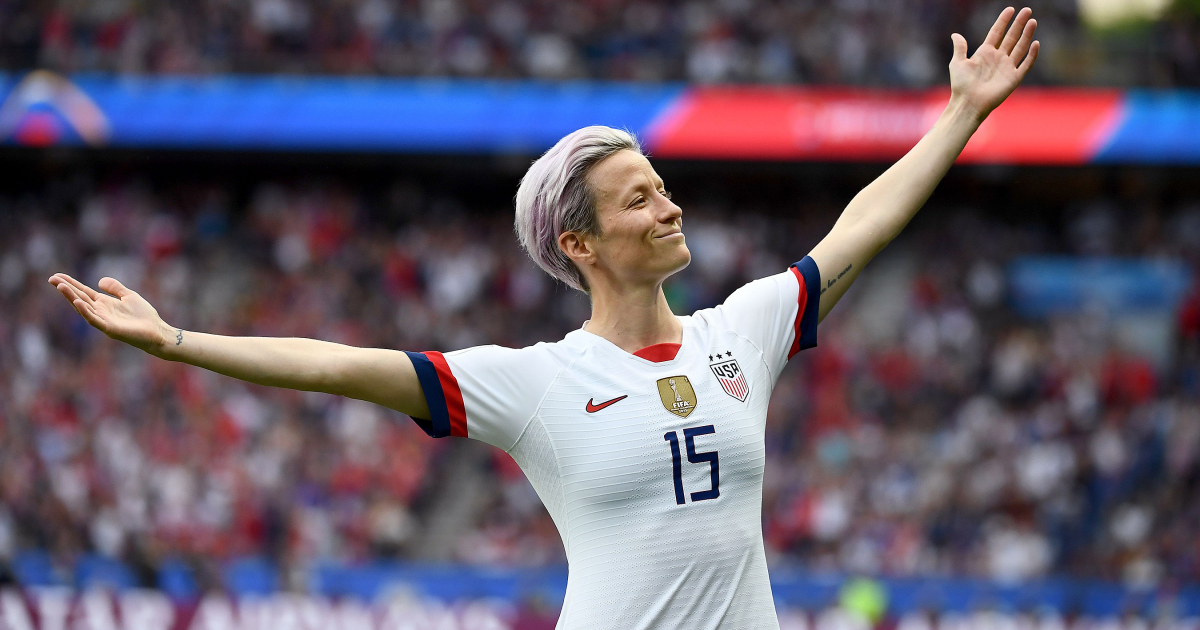 The biggest question going into the final was the health of two stars, after Rapinoe missed the semifinal with a hamstring injury and Martens left at halftime of Netherlands’ semifinal with a foot injury.

Rapinoe didn’t play the game of her life. She looked at times like someone whose touch was half a beat off after missing training. But she put the ball in dangerous spots multiple times in the first half, denied only by Sari van Veenendaal’s goalkeeping. And with the ball on the penalty spot in the 61st minute, Rapinoe calmly finished her third penalty in as many tries this World Cup.

The goal tied her with Morgan and England’s Ellen White for the tournament lead.

The first woman to start three consecutive World Cup finals, Rapinoe will go down as the face of this tournament — and the voice of it.

“I’m made for this,” Rapinoe said. “I love it, I do love it. Obviously, getting to play at the highest level in a World Cup with a team like we have is just ridiculous. But to be able to couple that with everything off the field — and to back up all of those words with performances, and then back up all of those performances with words, it’s just incredible.

“I’ve said this before, but I feel like this team is in the midst of changing the world around us as we live.” 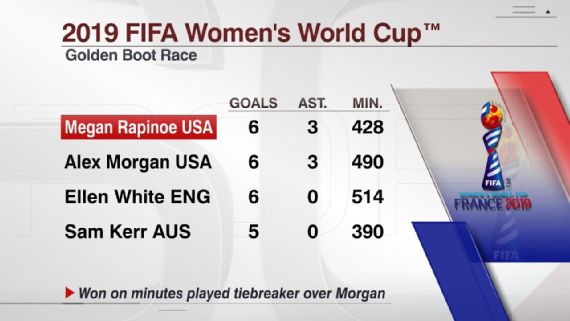 Rapinoe finished as top scorer of the tournament

Rewind three years, and it wasn’t clear who the voice of this team would be. Mostly that was because it wasn’t clear what Rapinoe’s standing was after she struggled to make it back from injury in time for the Olympics and then struggled to contribute in that tournament. She was 31 years old and being asked to revitalize, if not reinvent, her game.

A few months later, she was booed loudly upon entering games in Columbus, Ohio, and Atlanta after kneeling during the national anthem.

There are almost as many reasons that this team became what it is as there are players on the roster, but start with Rapinoe. Start with that pose she struck again after scoring.

There she is, world, come and get her. Which is how this team eventually played.

On the field, Sunday wasn’t quite the capstone that Carli Lloyd enjoyed four years ago with a hat trick in the 2015 final in Canada, but it was more than enough. Because the tournament’s Golden Boot winner brings a lot more than goals to the table. 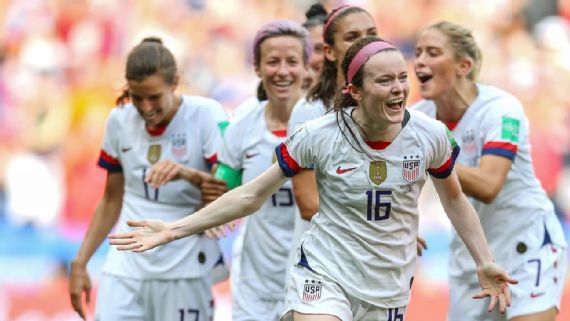 Rose Lavelle scored on a left-footed rocket in the 69th minute. Maddie Meyer/FIFA via Getty Images
What we’ll remember is the goal, but there was much more than that.

Perhaps the most impressive moment for Lavelle in this World Cup came when she talked about her performance in the quarterfinal with France. Granted, the U.S. women survived that game, so there wasn’t guilt involved in the days after, but it’s not often you hear a player pull out the word “atrocious” when talking about her own play. All the more for someone playing in her first World Cup in her early 20s. The point being, Lavelle kept a pretty even keel for such a big stage.

And after a strong semifinal performance against England, she was good from the start in the final. Whether it was dropping back into a left back position to cover for Kelley O’Hara at times or chasing 50 yards back to blow up counters (albeit sometimes off her own turnovers), Lavelle, who won the Bronze Ball as one of the tournament’s top players after scoring three goals in six games, was always easy to spot because she was right in the middle of the action. 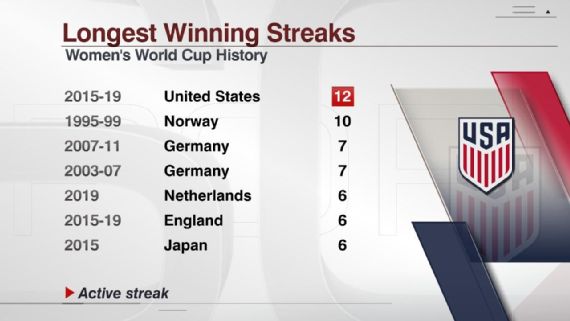 Then came the 30-yard run with the ball. The Dutch defenders retreated and retreated, she made one quick touch to her left to get past Stefanie van der Gragt, then shot back in the direction she came from.

“That girl,” O’Hara said. “When she started driving with the ball, I knew it was going in because that’s just what she does. I feel like she just does things casually that are out of this world.”

The United States waited a long time for Lavelle to shake up its midfield, showing patience as she battled injuries after a sensational debut in 2017. It was well worth the wait for a rising star — or as Rapinoe said, a star already.

Lavelle retreated to a bunk bed and cried when the U.S. women lost in the 2003 World Cup. Sunday she made sure a lot more kids will be out trying Johan Cruyff turns and 20-yard rips in their backyard.

“It’s crazy how it comes full circle,” Lavelle said. “Now I get to give back the same way players on this team had given to me.”

VAR makes its mark in World Cup final
Sunday was the first World Cup final for the Netherlands and the first for about half of the U.S. starting lineup. Almost an hour into the game, video assistant review made its debut, too. 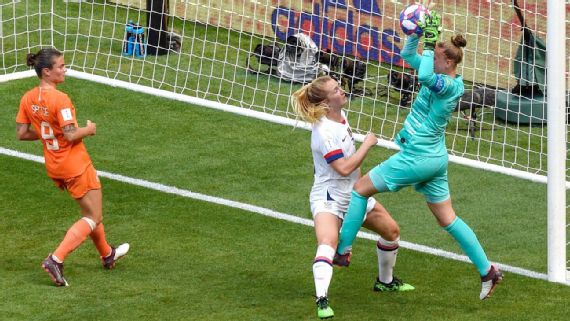 Sam Mewis and the U.S. women were held scoreless in a first half in the Women’s World Cup for the first time since the 2015 semifinals against Germany. Jean-Philippe Ksiazek/AFP/Getty Images

After having more of the ball in the opening half without getting anything past van Veenendaal, the U.S. women were struggling to come up with a cohesive attack in the second half when Tobin Heath sent in a cross from the right side. The ball deflected off a Dutch player and floated toward Morgan. That was when van der Gragt, perhaps trying to get her bearings on the redirected ball, lifted a boot high toward the ball but made contact only with Morgan’s arm. The referee initially signaled for a corner kick, but as fans chanted “V-A-R,” she signaled that the VAR officials had advised her to review the play.

Considering van der Gragt missed the ball and her cleats made contact with Morgan’s arm, replays left referee Stephanie Frappart little choice but to point to the spot for a penalty.

No quick start for the United States

Like Megan Rapinoe, Alex Morgan finished the World Cup with six goals and three assists. But Rapinoe did it in fewer minutes to win the Golden Boot. Catherine Ivill/FIFA via Getty Images
The streak of early goals was going to end at some point, no matter how well the U.S. women played. The Americans scored inside of 15 minutes in each of their first six games, and the sport just doesn’t work that way for even the greatest teams. But it wasn’t bad luck or bad bounces that stopped the United States early in this game. The Americans just didn’t play very well.

Julie Ertz got caught upfield, leaving too much space for the Dutch to counter. O’Hara was called for a foul throw. Rapinoe couldn’t skip past a defender on the left side and jogged after the play. Abby Dahlkemper launched one of her normally pinpoint cross-field long balls — right into the arms of van Veenendaal, who won the Golden Glove as the tournament’s top goaltender. There was not only a lack of precision, but even the energy seemed off in those opening minutes.

“I didn’t expect them to sit in a lower block, to be honest,” O’Hara said. “I think it took us a bit to figure that out. I’m proud of the way that we stayed in it. I think that’s the best part of this team is we just know and we believe and we feel. We just do what we have to do to get it done. Whatever the game calls for or is giving us, whatever our opponent is giving us.”

The upside for the United States was that the Dutch seemed willing to absorb and take their chances later, launching only a couple of dangerous counters in that time. They came to regret that.

The U.S. women went throughout the entire tournament without ever trailing, not playing from behind since rallying for a win against Australia in April. 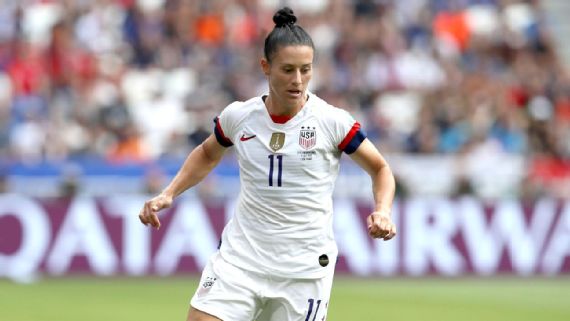 Defender Ali Krieger was subbed in at halftime for Kelley O’Hara, who had been in a head-to-head collision late in the first half. AP Photo/David Vincent

Ali Krieger is one of the most positive people you’re likely to encounter in any walk of life, someone who forged her own path playing professionally in Germany after dealing with a serious medical issue during her time at Penn State. But she admitted before this World Cup that being dropped from the U.S. team after the 2016 Olympics took her to a dark place.

She didn’t know why she was out of the mix. She didn’t know what it would take to get back in, as the United States auditioned young outside back after young outside back for the role she filled in both the 2011 and 2015 World Cup finals. Finally, with only weeks to go until this World Cup, she got the call from Jill Ellis. With no obvious replacement, Ellis settled for the veteran presence. It paid off Sunday afternoon. So did Krieger’s perseverance.

With O’Hara out of the game at halftime, presumably related to a head-to-head collision with Martens near the end of the half, Krieger warmed up while the rest of the team was in the locker room, then came on and did her job for 45 minutes.

Was it a star turn? No. But it was what the U.S. women needed.