There’s a small apartment on 137th Street in Hamilton Heights that contains one of the most peculiar videotape collections in New York. The dusty VHS archive fills a vast library that contains the analog history of a sport: 8,000 cassettes with recordings of over 55,000 boxing matches that span 40 years.

It was the life’s work of Bela Szilagyi, a classical pianist and passionate fight enthusiast, who started the collection in 1979 when he taped a featherweight title match on a Quasar videocassette recorder. Mr. Szilagyi died in 2012 at 78 years old and his wife, a soft-spoken piano teacher, became the collection’s archivist.

On a recent Sunday night, Elizabeth Szilagyi, 76, commenced her ritual in the living room. She poured herself a glass of red wine, put on her reading glasses, and sat in front of her TV with a notepad in hand to record a welterweight fight at the Microsoft Theater in Los Angeles. She ate a salad while taking notes about the match for the information card that gets filed in the archive. The bell rang and the boxers marched toward each other. 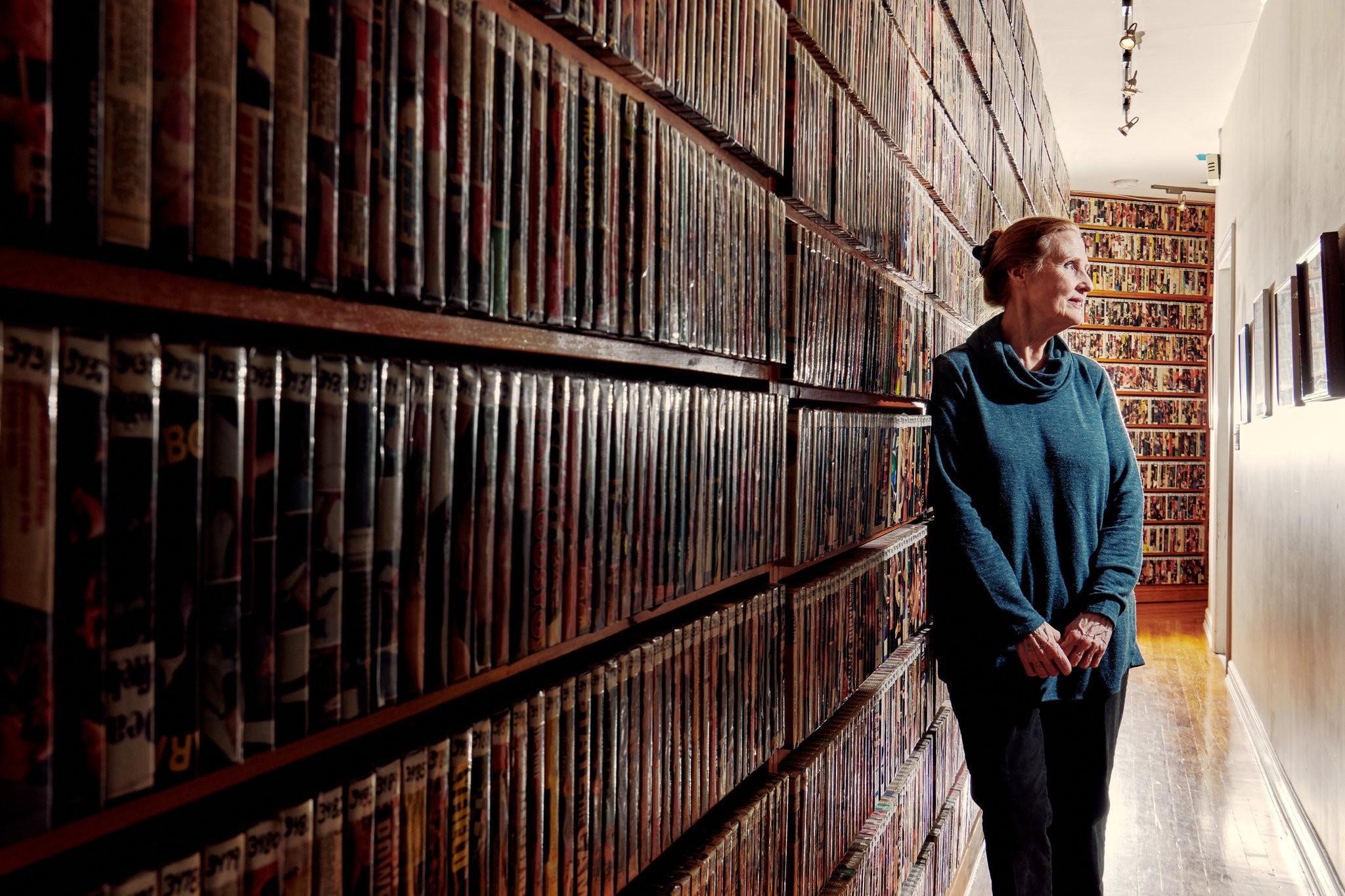 Elizabeth Szilagyi’s collection has 8,000 cassettes with recordings of over 55,000 boxing matches that span 40 years

Elizabeth Szilagyi’s collection has 8,000 cassettes with recordings of over 55,000 boxing matches that span 40 years.CreditVincent Tullo for The New York Times

“The fights have gotten boring now,” she said. “Everything is soft and controlled.”

“Pacquiao came back recently, but he’s past his prime,” she said. “I always liked De La Hoya. He looked innocent, but he knew what he was doing.”

One fighter got stung on the jaw with an uppercut. Ms. Szilagyi jotted down the detail in her notepad. 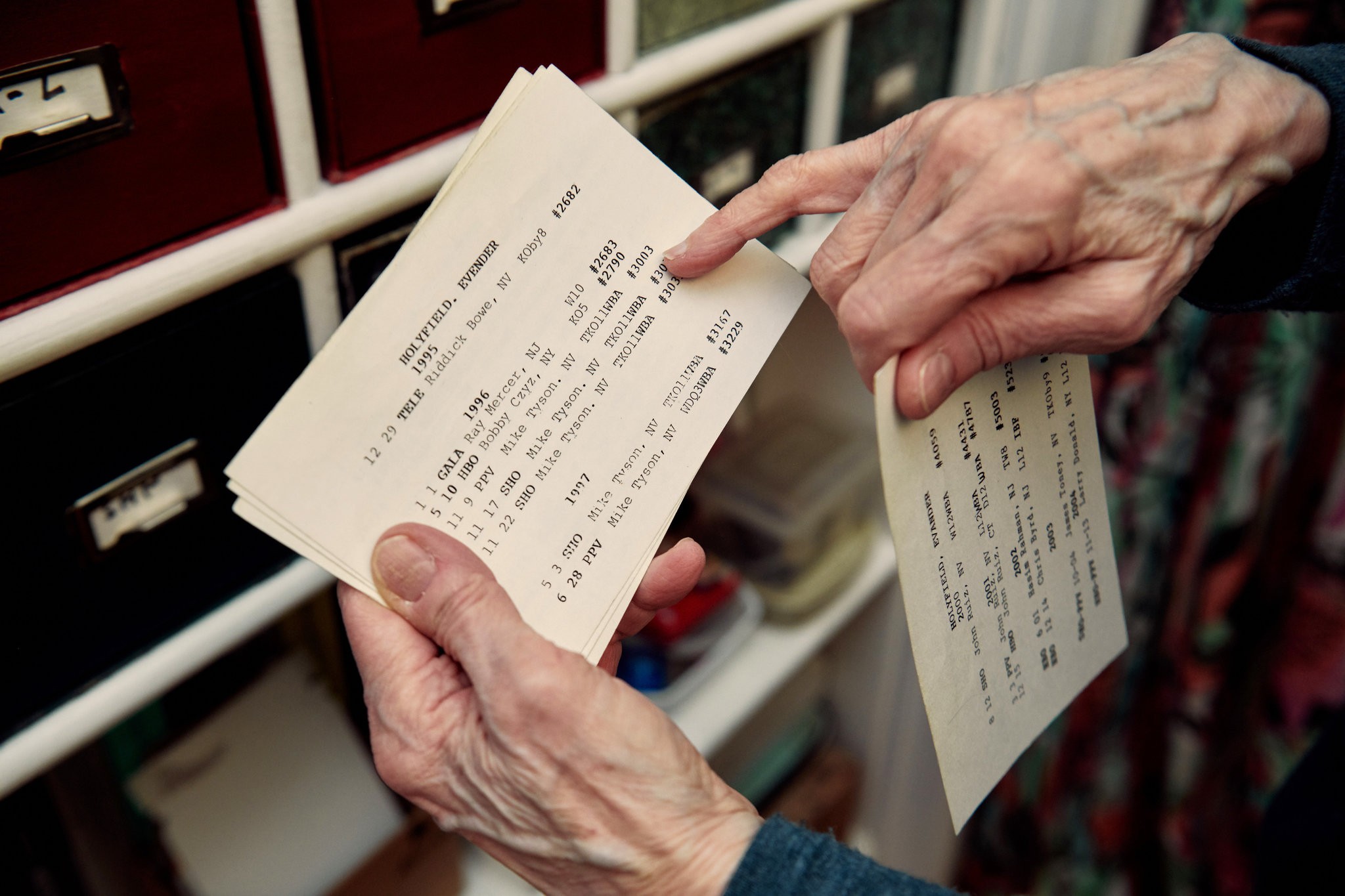 An index card with pertinent information accompanies each recording

Ms. Szilagyi ejected a disc from a recorder — the archive transitioned to DVD a few years ago — and scribbled some information onto it before slipping it away into a shelf. These days, the collection rarely receives visitors and dust has grown thick across its cassette boxes.

She held a framed photograph of her husband, Bela, smiling beside Muhammad Ali. “Before he died, he told me: ‘The collection is going on forever. It has to go on,’” she said. “But he left that for me to sort out.” Last year, Ms. Szilagyi made the anguished decision to wind down her duties as an archivist and try to sell the collection.

“I’ve decided this can’t be the rest of my life anymore,” she said. “If the collection is here, he’s still here. But he left me with an albatross, and I just don’t have more to give. I think he’d understand. Everyone has said I need to move on. I’ve told them, ‘I’ll stop when I’m ready.’ Now it’s time to let go.” 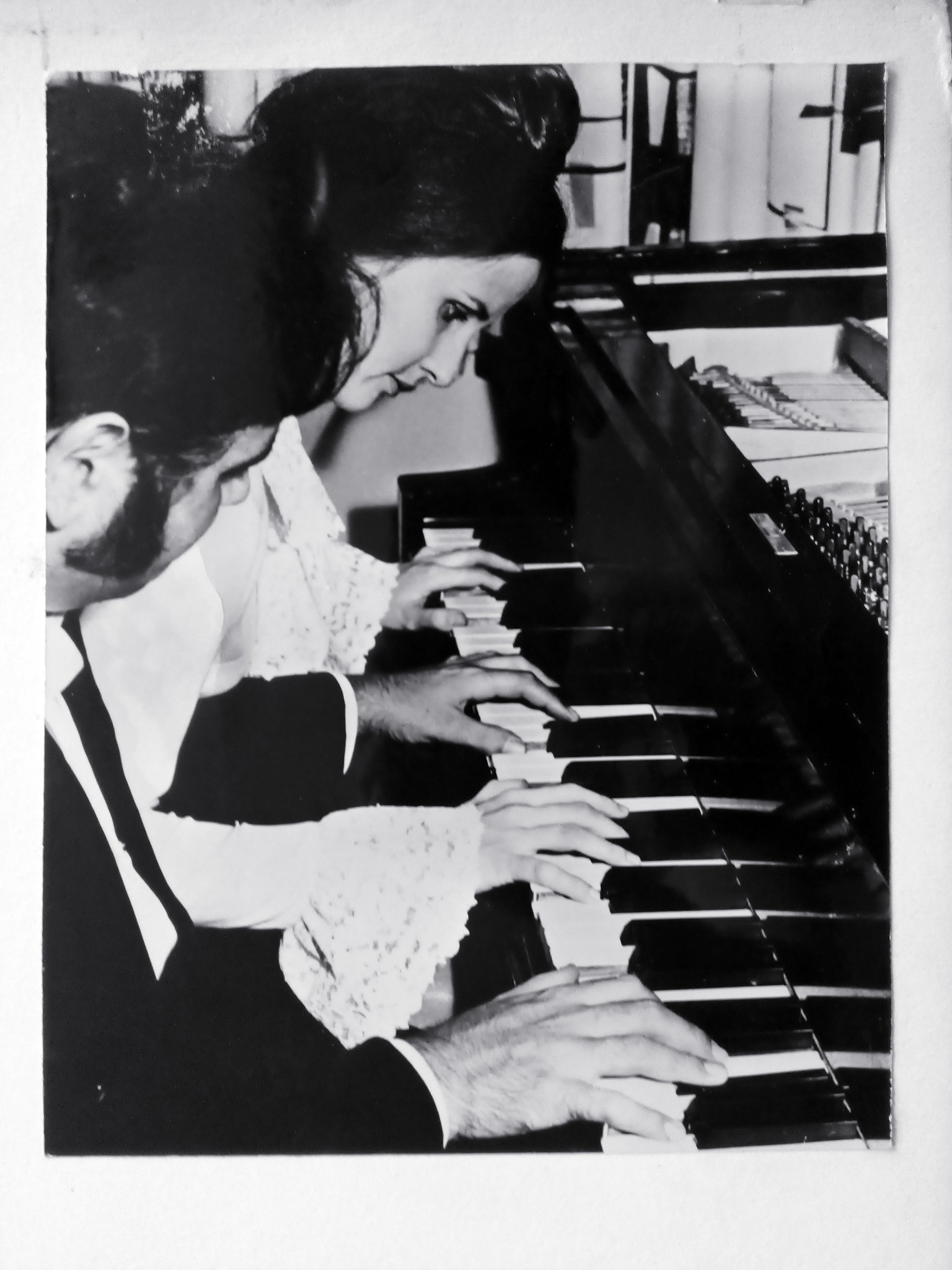 Mary Elizabeth Brett started studying with Bela Szilagyi, a celebrated concert pianist, in 1964. They married in 1968 and toured together

Ms. Szilagyi’s attempts to free herself of the collection have proved difficult, however, and she’s struggled to find a market for the videotapes in the YouTube era. For decades, the archive filled a niche in the boxing world, operating as a word-of-mouth videotape rental service for networks needing archival footage, fighters wanting to study opponents, and fight buffs seeking obscure bouts, but that business has dried out in recent years.

She’s been approaching museums, auction houses, and sports historians about purchasing the collection, she said, but interest has been muted. “I’m hoping to get a good number, but at this point I’m open to anything,” she said. “I can’t get away from it. I can’t not see it. I can’t leave without thinking of it. It has a life of its own now.”

Bela Szilagyi was a celebrated concert pianist and his love of boxing made for a poetic contrast that people remarked on his whole life. As a child, he played at Carnegie Hall and then studied at Juilliard, and he would listen to fights on the radio as a reward from the rigors of practice. Mary Elizabeth Brett met him in 1964 when she studied with him. On one of their first dates, he took her to a fight at Madison Square Garden. “I remember if you sat too close to the ring you’d end up with red spots on your clothes,” she said. They married in 1968 and toured as an act that performed classical piano duets. 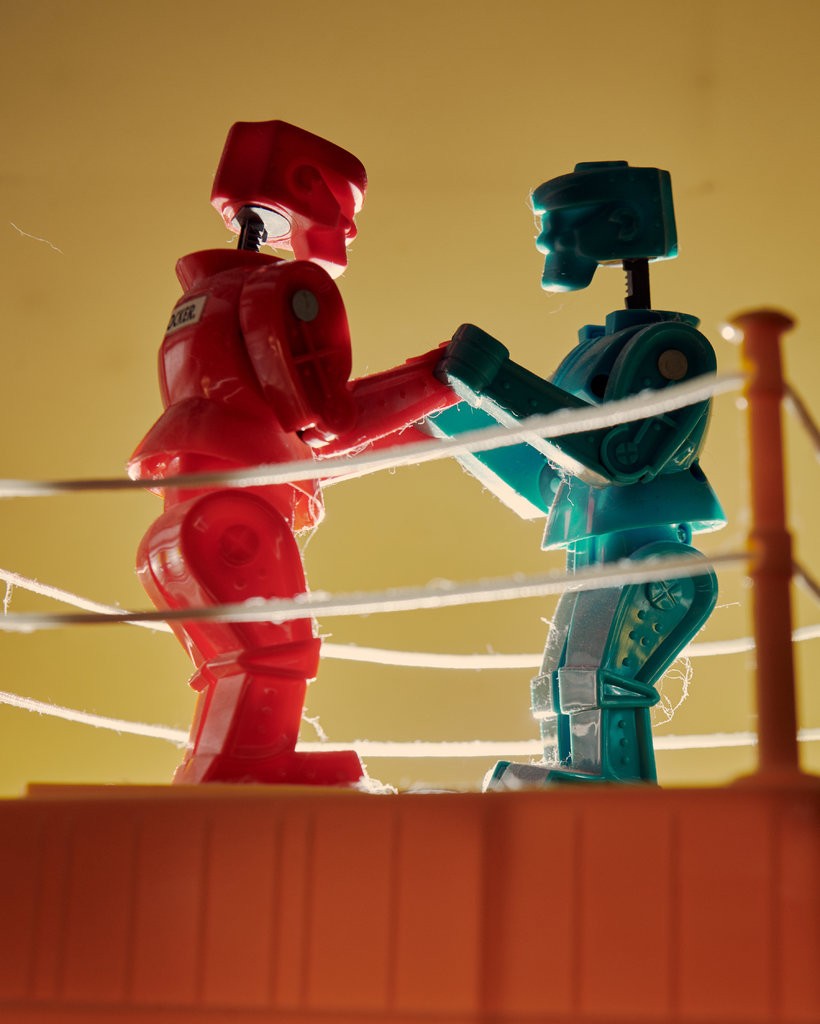 Mr. Szilagyi’s collection started humbly enough. He recorded the first tape in 1979: Danny “Little Red” Lopez versus Robert Castanon. But he soon had grander visions, seeing himself as a curator of boxing history. He began taping every fight he could and typing up reviews of each bout. When Buster Douglas knocked out Mike Tyson in 1990, Bela wrote a breathless dispatch: “Douglas has stood the boxing world on its head and now calls the shots,” he wrote. “Was it a fluke, or is Tyson finished? A CLASSIC FIGHT.”

Ms. Szilagyi sometimes worried about his hobby. “Here is the man I love,” she said. “I wondered, ‘Is this what my marriage is going to look like for the rest of my life?’”

By the mid-1980s, word had spread about the collection and promoters, fight fans, and networks were calling the Szilagyi apartment for tapes. A rental service, Captain Video Boxing, was founded. Their clients, Ms. Szilagyi said, included promoters like Don King and the teams of fighters like Evander Holyfield, Mike Tyson, and Oscar De La Hoya. 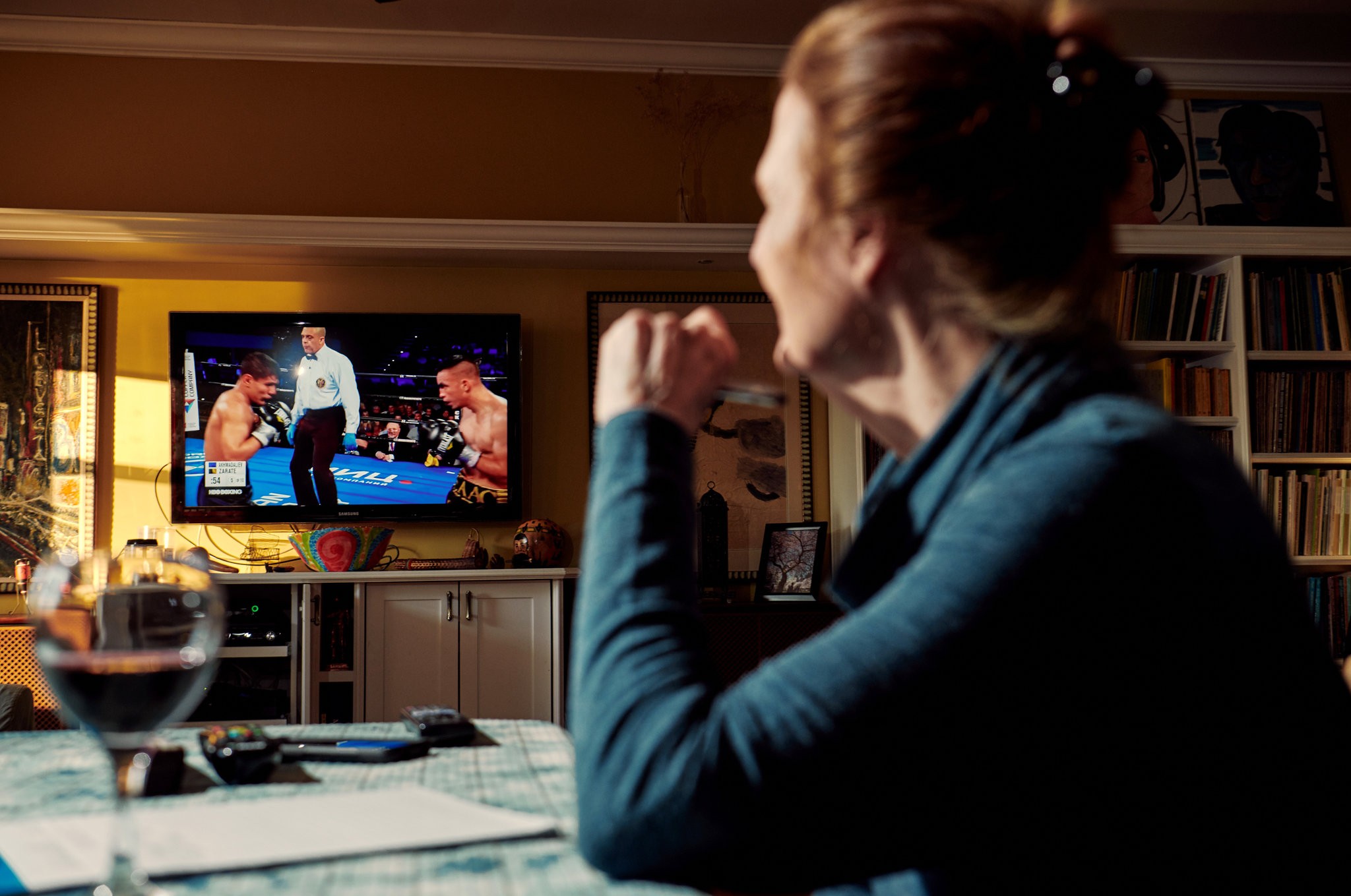 The ritual: A glass of red wine, a notepad and a boxing match

Teddy Atlas, who helped train Mike Tyson as an amateur, remembered relying on the archive. “Everyone used Captain Video,” he said. “If I wanted to see how a fighter was in the ring, I’d call them to get the tape. If I was training a fighter, we’d get the tape to look at opponents.” He added: “Its relevance has been diminished with the passing of time. Now it’s a thing that represents a man’s love for boxing.”

Mr. Szilagyi died in 2012 and a mix of classical musicians and boxing industry personalities attended his funeral. By that point, his collection was becoming increasingly obsolete. Just about every fight was available online, and you didn’t have to trek up to Hamilton Heights and find a working VCR.

Today, Ms. Szilagyi still has a few loyal customers who rent tapes, she said, including an old Atlantic City matchmaker and a construction worker in the Bronx. Her youngest daughter, Anda, 41, grew up around the collection and helped record fights when her parents were away.

“This has all been part of a grieving process for her. It was never just about the tapes,” Anda said. “But it’s time for her to live her own life again. She’s not just a widow. She’s much more than that. She’s an amazing pianist and teacher.”

The other night, as Ms. Szilagyi recorded a match, a fighter was knocked out. She put on her reading glasses and dutifully jotted, “KO,” into her notes. After taking a sip of wine, she said that she still senses her husband’s presence in the apartment. “When there’s a big fight on — and only then — the light above my TV turns on and flickers,” she said. “I think that’s Bela saying hello.”

She doesn’t know what the fate of the collection will be. The offers she’s received have been miserly, she said, and she’s suspicious it will get poorly taken care of. “I want to get rid of it, but it’s very important to me it ends up in the right hands,” she said. “It will be hard. Like he died again. At least it would be gone.” She admitted briefly considering a drastic measure: What if she just tossed the videotapes out onto the street?

“I don’t think I could do that,” she said. “That would be cruel. Bela would come back. That light would start going off like crazy.”